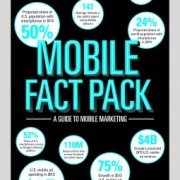 Mobile Ad Spending To Surge 75%; Get The Stats in Ad Age’s U.S. mobile ad spending this year will surge 75% to nearly $8 billion, with Google pocketing half of that, according toeMarketer estimates. Mobile ads will account for more than 50% of Facebook revenue by year end. Half the U.S. population will be carrying smartphones in 2014.

For the giants of tech, mobile took on added urgency this year as online audiences started shifting away from PCs faster than anyone expected. Smartphone penetration exceeded feature phones in the U.S. for the first time, according to ComScore.

The good news is that as consumers spend more time with their smartphones and tablets, they are, for the most part, sticking with the brands they used on PCs. Google search is just as dominant on mobile as it is on PCs; the same is true for Facebook’s social graph. Even struggling Yahoo has been able to build successful mobile products such as its weather app.

The challenge is that every user that shifts from a PC to a mobile device represents lost advertising revenue. That reality has been playing out in the earnings reports of the biggest sellers of online advertising over the past year, like Google and Yahoo.

The problem is part structural: Phones in particular have much less real estate for advertising, and traditional banners are even less appealing than they are on PCs.

It’s also a tech problem. Browser-based cookies do not work on the mobile web or in mobile apps, so when a user goes mobile they also become invisible to advertisers. That’s one reason mobile tech startups are being snapped up at a furious pace by the likes of Yahoo, Criteo, Media6Degreesand X+1 as they attempt to use advanced algorithms to track mobile audiences.

But there’s hope. As Facebook has shown over the past year, ads designed intelligently for mobile can make all the difference. Facebook got a huge scare last summer when its audience started shifting to mobile faster than anyone expected. Since then, the company moved in-feed “Sponsored Stories” to phones, and Facebook has been so successful that its share of revenue from mobile grew from near zero last year to 41% as of last quarter. Before the end of the year, mobile ads will account for more than 50% of Facebook’s revenue.

Facebook did it by creating an immersive unit and breaking down the walls between PC-based display and mobile. Google is doing the same thing with its “enhanced campaigns” that blend screens.

By the end of the year, you can imagine a new divide emerging: the brands that have successfully made the transition to mobile, and those that haven’t.

What side will you be on?

Google advises marketers to get moving with mobile

Video takes the world by storm [video]
Scroll to top